On Monday, I looked out the window to see this. A pay loader on our street to clear a path down the street.  It then got stuck at the top of our street and had to be rescued by a plow. Crazy. My husband and I worked in shifts and made steady progress to clear our driveway. Yesterday, his brother came over to help with the rest. It’s clear enough to get one car in / out, but it’s tight. I’m hoping that our usual plow guy can come by and help widen things a bit. And maybe clear whatever we’re forecast to get tonight.

Good thing we cleared it, as our mailbox is still inaccessible. The mail-person had some guts and drove their truck down our driveway to deliver the mail. There was not much considering we haven’t gotten mail since Friday! There was a swap box for me – I received an adorable baby unicorn & an “OctoPaul” & “OctoPolly” for my little ones! As soon as I started to open the box, Lorelai piped up, “Can I have that?”.  They are adorable! Thank you very much to Cindy, my swap pal!

After I finished my slug, Lorelai requested a princess one.  A bit of stash diving and voila! Princess, the tiara-less, slug! I used one skein of bulky for the body and double up on other stash yarn for the eyes, foot & antennae.  It’s maybe 6 inches tall and 10 inches long! I left it outside her bedroom door last night to surprise her.  Success!

The Blizzard of 2013 has come and gone but we’re going to be dealing with this mess for a while. We measured 26″ outside our front door, and CT effectively shut down this weekend. My husband and I worked shoveling our driveway yesterday and today and we’re maybe 1/3 of the way done. We haven’t seen a plow truck since 4pm Saturday and that was on the next road over – our road has not been touched. It’s going to be several days until we can get out of here. I’ve never seen this much snow come from one event  and there’s no place to put it! It is very pretty and very striking. These once in a lifetime events seem to be happening more often!  On the plus side we have power and we are ok with food and stuff. I’ve been working on my sample sweater for Plymouth, have started my second Fumior, and have wound yarn for swatching.

I’ve also tried to give my wrists a break by crocheting – they are sore from shoveling and crochet doesn’t seem to add to the ache. I worked up this chill slug, fulfilling my participation in the Fresh Stitches Slug-A-long. He was very quick and fun to make – the Fresh Stitches patterns are very well written, and the blog posts were really helpful – I found the post about crocheting antennae particularly helpful! I’m naming him Nemo in honor of the storm.  I’ve had a request to make a princess one next. When asked for more details that means a tiara & ribbons. I’m hoping a pink and purple version will satisfy.

I am a big fan of Pinterest and the feeling of ‘pseudo-organization’ it brings me. I have the usual boards on there and a few that I created. I have started a new board that I am calling “I Tried It!” where I can pin things that I have actually done having found them on pinterest. Several weeks back I found this pin sharing the brilliant idea from GoodenessGracious.com to use an apple slicer to chop up potatoes for french fries! I did it! It works! I did have to go back and cut a few wedges that were thicker than I liked, but look – photo proof!

And this recipe for the “Oven Baked Parmesan Seasoned Fries” are what I made. Yummy!

Today is such a blah day. The Lorax is just about over her cold, the baby is in the middle of it and I can feel it coming on. I am happy for the opportunity to knit with bright green yarn from Knit Picks; it will be in tomorrow’s “Yarn Along” post. We woke up to a slushy inch or so of snow and to work out some of my daughter’s energy, I did take her outside while the baby was napping.

Probably a bit overdressed for slush that was melting, but she was kept warm and dry, so my job was done. She’s throwing a snowball at me in this photo.

Phrase of the day around here on Wednesday – That’s a lot of snow. I think one of us said it at least once an hour. I am one of those people that generally does not mind snow. I live in New England. It gets cold in the winter. Part of the New England charm is the snow (and it makes the cold worthwhile!) The snow event yesterday really was impressive – those flakes just kept on coming all day long! Even Dan’s work closed and that never happens!

The kids watching Dan shovel so that Jackson wouldn’t be lost in the snow when he went out.

I think we got around 18 inches of snow. A stack of several dachshunds, at least. A plus side of the cold and snow is that Jackson’s potty breaks are real quick!

This is Jackson’s ideal – snug in a blanket. Just add a human lap for more warmth and he’s in heaven!

I curled up too and though it would be a perfect day to be buried under wool while working on a blanket or sweater, instead I had this at my side:

A new WIP – Matchgirl – a pair of flittens for me. The yarn is Rozetti Yarns “Polaris” and it has sparkly sequins in it. I spotted a shop sample of these flittens in the yarn and was sold! I didn’t want to even try to wind up this yarn on my ball winder so it was a perfect project to christen my new yarn bowl (a present from my brother and sister-in-law!) and it’s perfect!

So today the great dig-out commences – be careful out there!

I have always enjoyed a good snow day. These days a snow day is not much of a disruption to my daily routine, or Lorelai’s. But there is something about snow, now matter if it’s a blizzard prediction or just a flurry that makes everyone a little giddy. I say, it’s New England. It’s supposed to snow. Yes, many of us are getting antsy for spring, but I’m ok with the snow – it’s been cold – and the snow makes it worthwhile. Mostly. Until you go out to shovel like I did this morning and holy chickens I think this would be categorized under “Heart Attack Snow” – it’s heavy – and though it is starting to melt, I had to remove my neckwarmer and jacket while shoveling I got so heated!

A snow day seemed like a great idea to give a new project a try. I needed my sewing machine to do something on a different project (knitting related, details / photos of that later) anyway, so I pulled out the machine and fabrics and ribbons and had fun!

These are roughly 6×6 inch taggie-style squares! I used two different flannels on each, the yellow flowers on one side, the baby print on the other, and an assortment of ribbons that I have had in the stash. AND, my most favorite part of all – they crinkle inside! I’m expecting to hear news of 4 babies arriving in the next 6 months, so I’ve got a head start on some of the gifts. These are so satisfying and they just made me giggle. I really want to make more of an effort to work with my sewing machine (and drawers full of fabric that I have – some with decent yardage, a whole lot of fat quarters) – I proved to myself that I can do it! Lorelai has been quite taken with them – she has taken one (the first one, not to be gifted as it was practice) and she has taken to call it a “cozy blanket”. So, the babies can drool and gum and play with the ribbons and hopefully rediscover it when they are 2. Speaking of the ribbons, I love playing with the macro setting on my camera –

Last night before we went to bed, this is what the outside looked like –

Snowy.
This morning Lorelai and I went out for a bit and did some shoveling.

Love how she fits in the tire track.

Back to the knitting. I am really hoping to finish up one gift that has been in the wings for EVER, I’ve got “Icing” to continue working on (I’m halfway done – now the decreases start!), 2 samples to start up and a sweater test knit to work on. And Dan’s socks. And the baby gifts 🙂 I like to be busy!

Happy St.Patrick’s Day! My dad kept saying that quote at breakfast this morning. I thought it was from 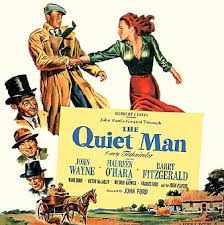 We’re snowed in. Dan’s off having a boy’s weekend. I’m enjoying being by myself, but I do wish I was able to go out to some stores. I did shovel yesterday, but when I was done all my hard work already had a dusting on it! And this morning everything is iced over. No way I’m getting out of the driveway! And with I did go out and try to shovel again, but the ice is just too much! I called a plow service, but I don’t know when they will get here. Not a huge rush, either way. They arrived as I typed this – took all of 5 minutes then he’s gone… guess I’ll get a bill in the mail! So, now I’m free, but probably won’t go anywhere until tomorrow. No need to be out with the St.Pat’s partiers. There’s always online shopping, right?

I’m working on a sleeve for the Hourglass Sweater – can’t seem to locate a 12″ US 7 needle – so I took my 16″ and Betsy’s 14″ and am working it as two circulars – it’s a little mucky, but overall alright. Mindless stockinette.

Seems like I’ve been up for ever. Several times last night Jackson went into a barking “rage” – he was hearing the wind / sleet, but when he jumped out of bed and ran down the stairs and I can’t figure out why he’s barking, that makes me nervous. Meeting my parents for breakfast was early too…

I was looking for some other Irish things to post here and it struck me that when I hear elvish the picture I get in my head is Gaelic.

“May you get all your wishes but one, So you always have something to strive for.”

“As you slide down the banister of life, may the splinters never point the wrong way.”

**Edited to add the following exchange:
Yesterday I shoveled some of the driveway, and when I came in my wrists were sore. I sent an email off to my bestest knitting buddy Betsy saying that I needed a project on larger needles due to my sore wrists. She immediately called me to comment on the fact that I wanted a project that was merely on larger needles instead of resting up… Amusing!